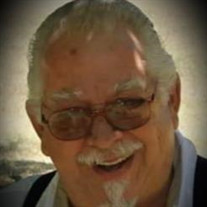 Richard Allen Call 2/8/45 - 5/31/19 On Friday, May 31st, 2019, Richard Allen Call, loving husband and father, passed away at the age of 74 in Placerville, CA, after a valiant struggle with heart disease. Richard was born February 8th, 1945 in San Diego, California to Bonnie and Lois Call. Richard met his wife, Sylvia Ann McCurry, in Quincy, CA. He followed her to Chico, CA then swept her away to get married on June 26th, 1965; one week out of High School. Richard and Sylvia began their life together in Oroville, CA, shortly had 2 daughters, Christine Venee, and Terri Lynn, and soon after moved to the Bay Area. Richard worked proudly as a retail shoe salesman for over 40 years, including many years on Union Square in San Francisco working at Bally. He took great pride in his work and was excellent at it. He never failed to win over clients with his bright smile, laugh, and quick humor. He was an avid storyteller and could captivate with his sincerity and animation. Most of all, he was loved for his generous heart, warmth, and love of people. After retirement, Richard and Sylvia followed their daughter Terri to Placerville so they could be closer to their grandchildren. Richard loved his wife deeply, was an avid fisherman, enjoyed camping, long drives along backroads and had a passion for hunting down the perfect find at garage sales or flea markets. He was known for his elaborate and eccentric stories that he told with great enthusiasm! Richard loved NASCAR, music of all kinds (especially old school rock and roll), bragging about his family, listening to his granddaughter sing, spending time with his grandson and daughters and was always up for a mean game of poker. Richard is preceded in death by his brother Keith Call, father Bonnie Ford Call, and mother Lois Enmon. He is survived by his loving wife of 54 years, Sylvia Ann Call of Placerville, daughter Venee Call-Ferrer, daughter and son-in-law Terri and David Thomas, two grandchildren Kevin and Lindsey Thomas, brother Frank Call, sister-in-law Vera Turner, and numerous nieces and nephews. His family meant the world to him. A celebration of life will be held June 29th, 2019, 1-5pm at Diamond Springs Mobile Home Park Clubhouse, in Placerville.

Richard Allen Call 2/8/45 - 5/31/19 On Friday, May 31st, 2019, Richard Allen Call, loving husband and father, passed away at the age of 74 in Placerville, CA, after a valiant struggle with heart disease. Richard was born... View Obituary & Service Information

The family of Richard Allen Call created this Life Tributes page to make it easy to share your memories.