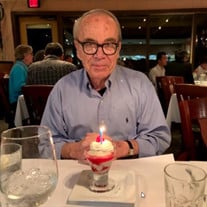 Service: The family will have a small Celebration of Life on Sunday, Oct 31st in Shingle Springs, CA. Dr. Michael John Medeck, known as “Papa,” by most, aged 79, passed away on Friday, October 15, 2021, in Folsom, California, just a few days short of his 80th birthday. He passed quickly from COPD and lung complications. Mike was born in Miller, South Dakota on October 31, 1941. His father was a Chiropractor in a time where that was a new idea. He lived with his mother, father, and older sister in a home that doubled as his father’s clinic. Mike would often observe his father with his patients, so his interest in medicine grew from an early age. He received his bachelor’s degree at the University of South Dakota and went on to medical school where he became a Doctor of Osteopathic medicine. Dr. Mike practiced as a General and Family Practitioner in South Dakota and Washington, where he had his own practice. At the beginning of his career, he was a small-town Doctor and took boundless joy in delivering many babies. He married Judith Clare Martin (of blessed memory) and they had three children, Todd Michael Medeck (57) of Shingle Springs, CA; Shannon Lynn (Smith) (53) of Granite Falls, WA, and Erin Danielle (Blake) of blessed memory. They had five grandchildren, Zachary Jon-Christian Medeck (34) of Kent, WA; Clare Katherine Blake (22) and Cole Christopher Blake (20) of Kirkland, WA; Ethan John Rupert Smith (21) of Granite Falls, WA, and Alexander James Smith of blessed memory. Shortly after his wife’s death, Dr. Mike moved from Bend, OR, to El Dorado Hills, CA to be close to his son, Todd, and Daughter-in-law, Shen. The 3 years he spent there brought a re-kindling of relationships with his family as well as the introduction of new family. Both Todd and Shannon were able to spend many special moments with their dad before he passed. Holidays and celebrations were always attended by Papa Mike and his trusted sidekick and beloved fur baby, Hannah. While Papa Mike was a quiet man, he was profound when he did speak, and was devoted to his family. He spent his last few years eating lots of Rice Krispy’s and drinking copious amounts of Pepsi which was his favorite drink. All while watching four football games at the same time (Go Seahawks!) Two years ago, Todd and Zach convinced him to join their fantasy football team, affectionately named “Doc’s Rascals.” He was enthusiastic about cooking and reading cookbooks and turned out many a memorable meal during his lifetime. He also became proficient on Facebook and loved keeping track of his grandchildren all of whom made him immensely proud. Having a birthday on Halloween allowed for legendary birthday parties and many costumes over the years. Mike’s avid love for photography captured these fun times. We were planning his 80th birthday celebration for October 31st. However, there will now be a celebration of life with a small gathering of family at Todd and Shen’s home in Shingle Springs, CA. His ashes, along with his departed wife’s ashes, will be released in Hawaii, as per his wishes. Hawaii held wonderful memories for them, and his desire was to be laid to rest with Jude in the place that they loved. He will be greatly missed as the patriarch of the family. May his memory be Eternal.

Service: The family will have a small Celebration of Life on Sunday, Oct 31st in Shingle Springs, CA. Dr. Michael John Medeck, known as “Papa,” by most, aged 79, passed away on Friday, October 15, 2021, in Folsom, California, just a few days... View Obituary & Service Information

The family of Dr. Michael John Medeck created this Life Tributes page to make it easy to share your memories.

Service: The family will have a small Celebration of Life on...