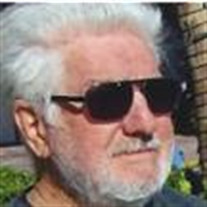 Dr. Gary L Straus, of Shingle Springs, California, passed away peacefully at home on April 18, 2016. He was born in Albany, California on September 16, 1935. He grew up in Talent, Oregon and graduated from Talent High School in 1953. He then attended a few universities including Southern Oregon College, University of Wyoming-Laramie, and Nova Southeastern University obtaining Bachelors, Masters and Doctorate degrees respectively. Gary had loving marriages with Alaine Fitch (1954-1976), Sharon Pede Pulliam (1976-1995) and a loving partnership with Ingeborg Cochrane (1995-present). Gary’s life was devoted to education, spending the majority of his career holding various positions in the Los Rios Community College District. He retired in 1996 as Vice President of Cosumnes River College Gary was an active member of the Shriner’s, the Scottish Rite, Masonic Lodge and the ELKS. He served his country in the Military and his peers as Union President for the Los Rios District. Throughout his life, Gary has loved the outdoors; hunting, fishing and camping. He has always loved the thrill of a deal whether buying cars, car parts or homes. In retirement he spent his time traveling the world and restoring cars. Most of all, he loved being with his friends and family. As he told all of his children, “My friends are my family, don’t ever forget that!” Gary is survived by his partner Inge; his daughters Jeanine Straus-Kramer (Allen) of Cincinnati, OH, Rebecca Straus Carlisle of Stockton, CA and Angela Clark of Keller, TX; his stepson Tim Cochrane; and his grandchildren Ashley Petrey Justin Carlisle (Jessica), Laine Kramer, Katherine Clark, Emily Clark, and Haley Cochrane. Those who preceded him in death were his beloved parents Harold and Ruth Straus; his brother Joel Straus; his wives Alaine Fitch (Chris, Jeanine and Rebecca), Sharon Pede Pulliam (Angela and John) and his sons, Christopher Leroy Straus and John David Pulliam. A celebration of life will be held this Friday from 1-3 in Placerville California. Please contact one of his daughters Jeanine ([email protected]) or Angela ([email protected]) for more information.

Dr. Gary L Straus, of Shingle Springs, California, passed away peacefully at home on April 18, 2016. He was born in Albany, California on September 16, 1935. He grew up in Talent, Oregon and graduated from Talent High School in 1953. He then... View Obituary & Service Information

The family of Gary L. Straus created this Life Tributes page to make it easy to share your memories.